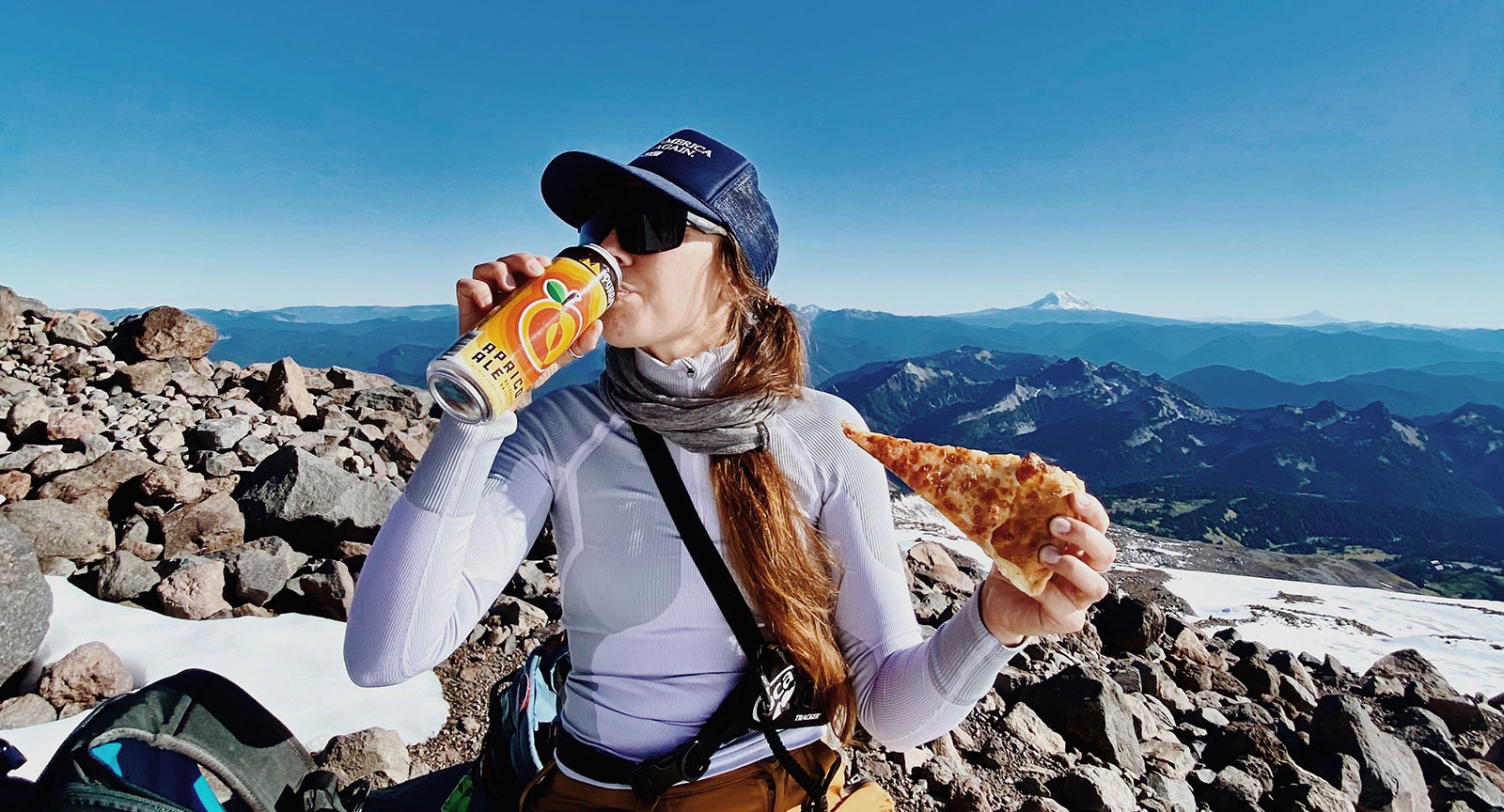 This blog post is part of our Discover the Northwest story series where we work with some of our favorite local explorers by asking them to go on an adventure, take over our Instagram Stories and create a blog post about the adventure life. This post was written by Morgan Smalley, an incredibly talented mixed-media painter who draws her inspiration from the very mountains and waterscapes where she hangs out. She is an avid explorer, and a big Pyramid Brewing fan. 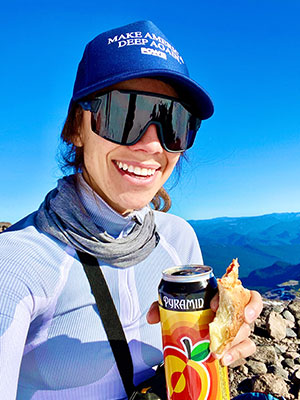 My name is Morgan, but I go by @mksmalleyart online. I was born and raised in the Pacific Northwest and it is her mountains and waterways that inspire my art and hunger for adventures.

It’s not every day that a company you’ve enjoyed for years reaches out regarding a partnership; so naturally, I lost my ever loving mind with excitement when the idea was presented. The tiny hamster-wheel in my brain raced with all of the possibilities for adventure, like a treadmill after new years day… should I embark on a kayak camp trip, an overnight in a fire lookout, socially distant backyard BBQ with my quarantine crew, or throwing some paint around in my art studio? Whatever I chose would have to be something as flavorful as the Apricot Ale and as colorful as Blazing Bright to do my favorite PNW beer justice.

After dreaming and scheming for a few days I decided on everything. To do it all.

All of the things that set my heart on fire for this place we live in—from “sea” to ski, with a fat slice of shenanigans heaped between. Gear room to water sports to ski touring one of the most iconic mountains in our state, I planned to do it all.

Before adventure begins, whether land or sea, I go to my gear room/art studio, like seeking advice from a wise old friend. Racks of boards, boots, coats and gear that my boyfriend Mike and I have accumulated over a collective 42 years in the mountains, stand in that order with a ski waxing table stationed at the beginning and my art studio in the rear. This is not only where each of our adventures begins but also where we spend our free time—tuning equipment, sharpening crampons and replacing headlamp batteries. It’s also where I work each day as a full-time artist. And the beer fridge is always set to a perfect glacier cold beer temp.

Day one started much like every other adventure, just hangin around with some pals in the beer room—I mean gear room! With our mini fridge stocked with Pyramid beer, we set to the task of packing our bags, checking the weather and snow reports and testing our safety gear that laid dormant for the past two months. Although snow conditions are considerably stable, it is important to ALWAYS bring a beacon, probe and shovel to be able to locate and retrieve any fallen, buried or separated people. Other must haves include: glacier glasses to prevent snow blindness on sunny days, medical kit, sunscreen and of course your favorite “summit beer.” For me, that means Pyramid Brewing’s Apricot Ale or Blazing Bright Juicy IPA. Once we had everything tucked away in our avy packs it was time to unwind from a long week and hang around with our quarantine pals. Just as we were about to disburse, the phone rang…. 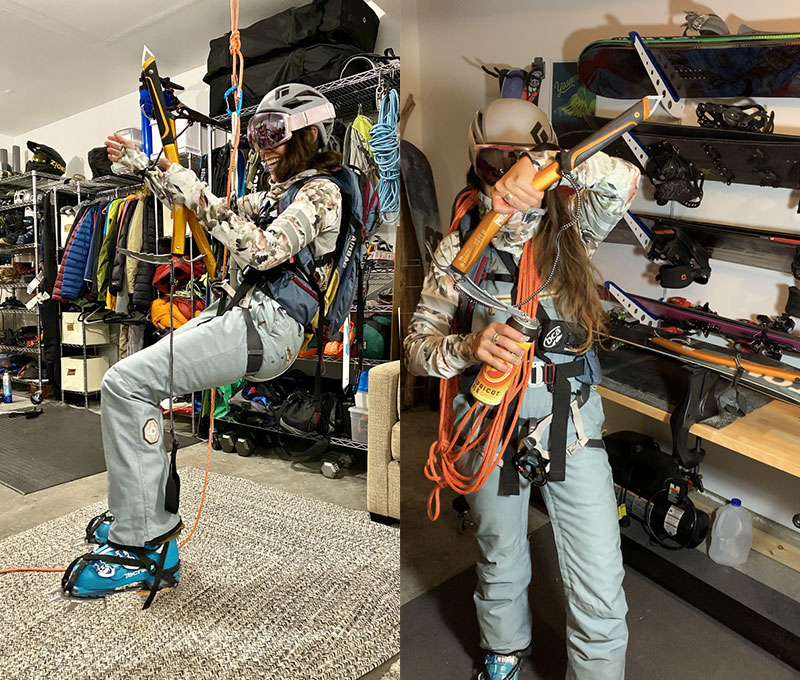 I had originally planned to take a break from packing and jet over to a local lake for some afternoon stand up paddleboarding. However, an invite to spend some time surfing behind a vessel in lake Washington sounded even better than manually propelling myself across a body of water. The invite was met with a resounding HECK YEAH so Mike and I popped on down to the marina with a cooler full of ice cold brews and snacks to share with our friends. 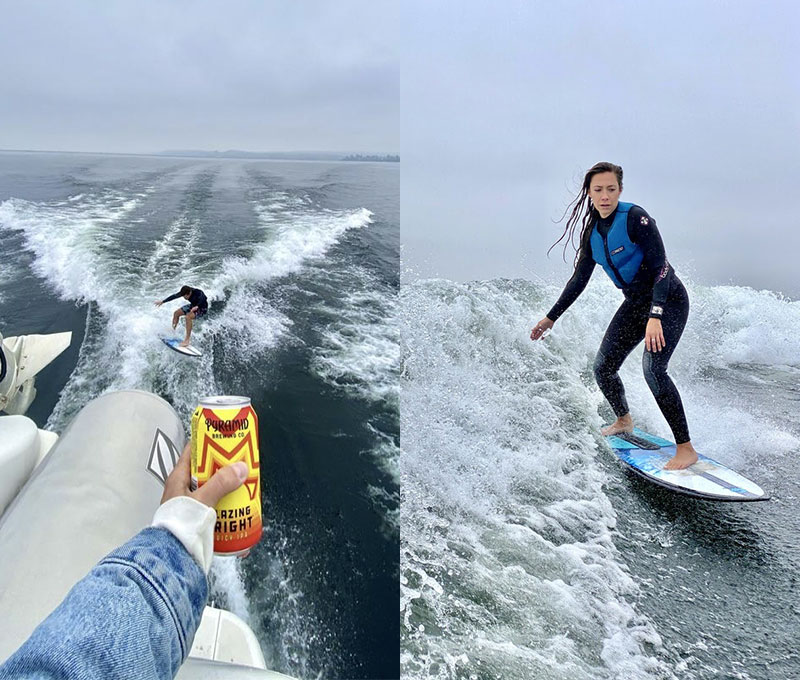 We shred the gnar, cooked up some curried veggies, sipped IPAs and warmed up our ski legs for the next day’s adventure. There is something rejuvenating about being blasted in the face with a 5 foot wake at 14 knots—makes you appreciate water in its more solid form. After ravaging our quads we called it a night to rest up for tomorrow’s adventure.

Day 2 - The Mountain Is Out

If you are from or have visited Washington, you may have noticed the giant volcano protruding from the earth a few crow flies south of the city - a lenticular cloud often shrouding its summit. For me and many other Northwesterners, this mountain is part of our identity. It somehow raised us up to be the granola-eating, Teva-wearing, Pyramid-drinking society in the Sound. If you’ve ever had the pleasure of experiencing the vastness of a 14,410ft mountain up close and personal like I have, it is likely you too will forever carry a reverence for her magnanimousness. 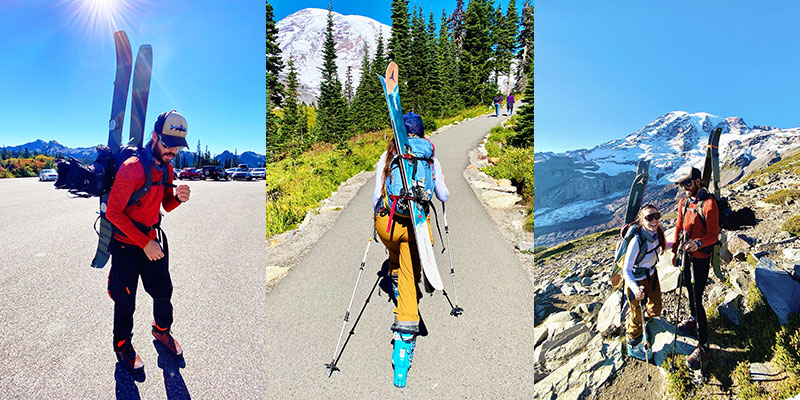 We arrived at Paradise parking lot, 5,400ft above sea level, after a sunny drive through the Mt. Rainier National Park and began our hike on the smooth paved trails leading up from the visitors center. Because it’s early on in the season, we knew there would be a bit of a hike before we made it to snow. We clomped along the trails in ski boots until approximately 7,200ft, where we finally unload our skis from our backs and began skinning up on snow. 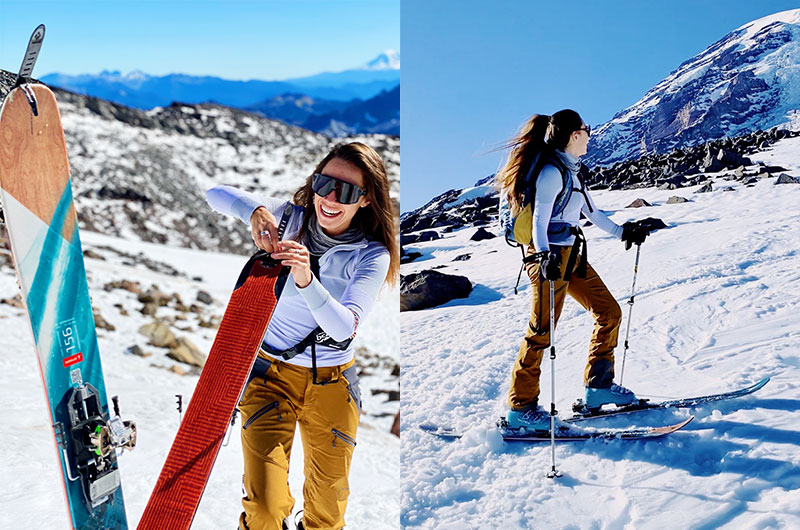 I cannot begin to express the excitement I felt in unloading these cattywampus sticks from my back and getting them onto my feet for the first time in two months. We transitioned our gear and continued up the Muir snow field towards Camp Muir. At roughly 9,000ft we found a few secure rocks to eat lunch on before skiing down. Since I had been thinking about my summit beer since we left the car I couldn’t wait to get my pack open, enjoy some leftover pizza and sip my Apricot Ale. 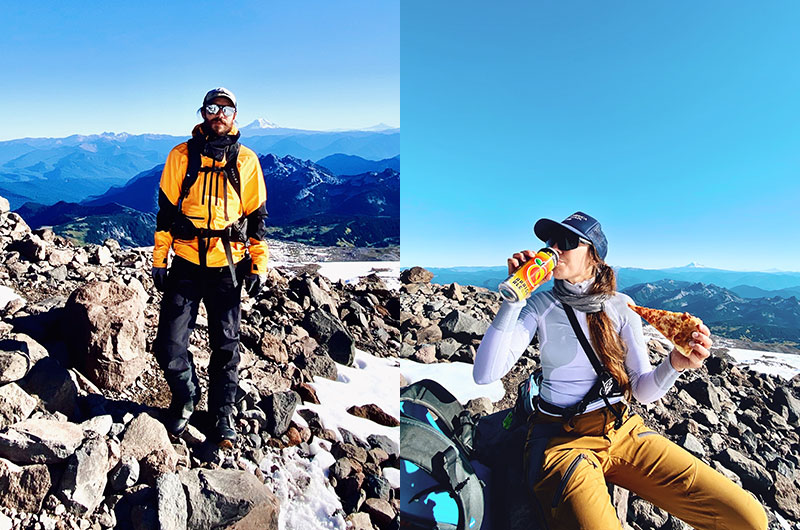 I chose the Apricot Ale for this sunny Sunday adventure because its light and crisp flavor is refreshing enough to make me forget about the beads of sweat running down my spine and robust enough to stand up to my spicy slice of pizza. Meanwhile, Mike chose a tropical vacation in a can, the Blazing Bright Juicy IPA, which is hoppy enough to satisfy his Seattle craft beer palette while remaining fresh with its fruity hints. Once we were sufficiently stuffed and had taken enough selfies to make Kylie Jenner blush, we began our ski descent.

The snow felt a bit heavy and grabby so we made our way down slowly to save what precious ligaments we had left in our knees while simultaneously dodging rocks and small waterfalls. Despite the variable conditions we were both thankful to have spent the day in the sun with each other, doing something we love, and with our favorite beers to boot!

After an 1,800ft ski run and 7.5 mile hike, most of which occurred with skis on our backs, we peeled off our sweaty gear and cracked a celebratory Hefeweizen to treat ourselves while the gear dried and we packed up the car for the drive back home to our dogs. 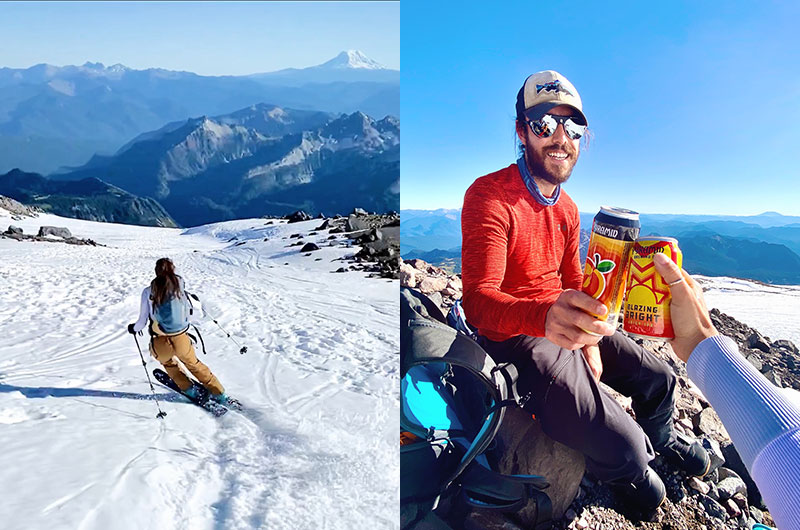 Whether you are going big or just going to chill at home I hope you do so while responsibly enjoying a PNW Pyramid brew, just like we did on this glorious weekend.

Cheers to your adventures big and small.